The lineage of Emanuel Jones of Chester County, Pennsylvania to Robert Frank Emanuel is documented with some certainty. 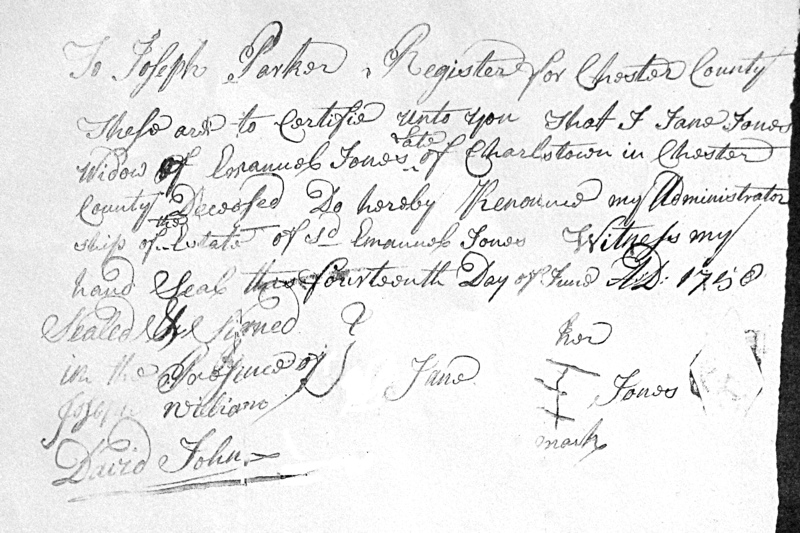 The migration of David Emanuel, Sr. and his family from Chester County, Pennsylvania to St. George Parish in Georgia is well documented. He appeared on a 1748 tax list for Lunenburg, Virginia. A son, Levi Emanuel, was born in Chester County in about 1748. David Emanuel was in Lunenburg County, Virginia by 4 Nov 1748 when he witnessed the Will of John Mills.

Assuming that David Emanuel was at least 21 years of age in order to witness the Will of John Lewis, he was born before 1752 and was about 37 years of age when he migrated to Lunenburg, Virginia sometime between in 1748. In 1748, Emanuel Jones was about age 58, and given their ages, it is reasonable that he did not also migrate to Virginia.

A 1 Jan 1751 deed for the sale of land by William Rees to John Ruffin is the last evidence of David Emanuel's residence in Lunenburg County, Virginia. This deed mentions land owned by David Emanuel on the west side of Ward's Fork. David Emanuel, Sr. migrated to St. George Parish, Georgia before 27 Mar 1759 when he was appointed collector of tithes and fines. During the period Apr - Nov 1760, David Emanuel, Sr. served as a Justice of the Peace in St. George's Parish.